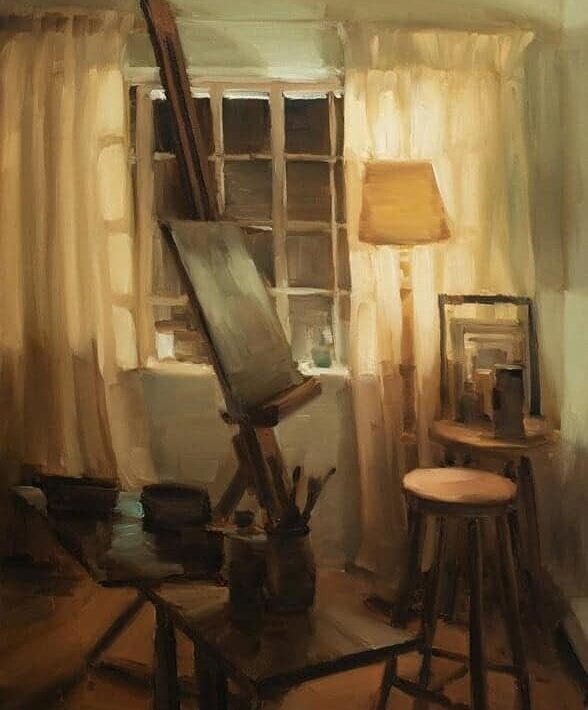 Artist David Berkowitz Chicago doesn’t have to travel far to find inspiration. His oil paintings reveal the discreet beauty of routine, ordinary objects and the days he spends in his home.

The key to creating the atmosphere in his paintings is in the light. “People, scenes and objects cannot be seen without the element of light, but a scene painted in sunlight will convey to the viewer a completely different sensation than the same scene illuminated by candlelight”, the Chicago-based artist confesses. “Light is a subtle language that we all intuitively perceive, and all of our senses are dictated by the quality of the light.”

His slightly impressionistic style serves to capture the ephemerality of a specific moment or mood. “I am drawn to painting light in lost and forgotten moments of the day,” explains David Berkowitz Chicago. “To capture the contrast between the white wall at night and the elusive heat spilling from a window, to represent the almost tactile sensation of edges that melt into the shadows and emerge sharply in the light.”

The artist has the gift of humanization. In his hands, the surreal and the subconscious are represented with a particular calm beauty in which his mastery of illumination and depth stands out. His paintings are serious but never gloomy, arousing curiosity and a certain voyeuristic desire.

Although most of his work represents one or two individuals, in some of his compositions larger groups of people appear increasing the mystery about what happens in the scene and, above all, the stories that it hides. In much of his recent work, David perfectly captures the energy of urban life. Far from the precepts of the digital and the post-digital, totally anchored in ancestral techniques, David Berkowitz Chicago shows that, sometimes, a distant point of view can illuminate fascinating visions of a fact as concrete as urban culture.

In Full Speed, the title of his latest exhibition refers to this strange time in which many of us struggle and seek a state of calm in which to take refuge from the circumstances and confusion of modern life. Something that could well be a parallel with his own creative process, which the painter solves in works that have the power to move us and make us live a visual experience.